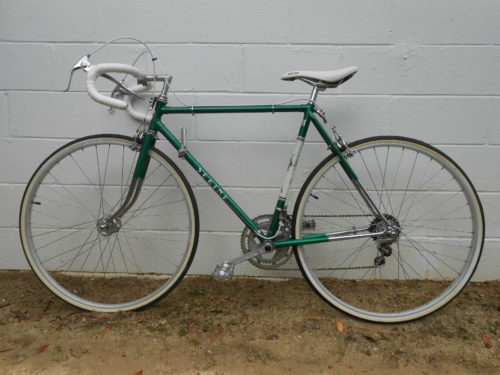 The Sekine is one of the best mass produced Japanese bicycles from the 1970s
(even though it was made in Canada for several years).
They were known for carrying better components
than similar bikes in the competition’s line-up.
They were a great first bike. Still are.
Sekine manufactured a full line from the
department store level SHA to the surprisingly nice SHX.

Middle of the line Sekines featured all alloy components
except possibly the rims.
Shimano 500 derailleurs drooped from the
dropouts and the Titlist shifted the chain back
and forth across the chainrings.
Both were powered by downtube shifters.
Shimano “Tourney” center pull calipers with quick release allowed for easy maintenance.

Sekine began its life in Japan, but located a major
manufacturing operation in Canada in 1973 to avoid
the 25% tariffs (geocities.com/randyjawa/SekineCyclesHistoryArticle.html)
imposed on imported cycles by the Canadian government
(reduced to 15% in 1975 (http://www.geocities.com/randyjawa/SekineCyclesHistoryArticle.html)).
CCM and Raleigh Canada just couldn’t compete with the quality arriving from overseas.
In this environment, Sekine did well,
benefiting from the protection of the tariffs until they were removed in the early 80s.